Every year there is the discussion about Santa Clause. It usually falls under two categories:

I personally was raised with #1 but as I had kids I leaned towards #2. The reason being, after I found out Santa was a lie (as a kid), it didn’t take long to come to the conclusion that Jesus was basically Santa Claus for grownups. (A post for another time). In other words, I had some pretty freaky thoughts remembering what it was like to grow up (since 6th grade) as a professing atheist. Yet… I still loved that fat man in the red suit.

Because of that love, my struggle with #2 was it did kind of seem like I was throwing out the baby with the bathwater. I mean, it was pretty amazing to see the big man himself, to get presents “from Santa”, to watch the Christmas specials, etc… It was a pretty special time that I didn’t really want my kids to miss. On the other hand, I did have a pretty real concern about the whole “lying to my kids”.

Then it hit me! Why was it so special for me? What was it my parents did to make it special? My parents loved celebrating! In fact, their family parties were always a thing of happiness and good memories. My dad was an extremely social person and my mom could organize a party that was amazing. Christmastime was no different. We had an amazing tree, Christmas music, yummy snacks, Rankin/Bass and Charlie Brown Christmas Specials on TV and of course, I can remember looking through the JC Penny catalog for  the hottest items to ask Santa for. I guess what I’m saying is while Santa himself was a part of it all, he wasn’t the main focus. Santa was always a very cool guy who just wanted to give toys and fun to kids all over the world.

This was my experience with Santa at home, but in other families, I saw Santa in a very different light. For so many parents, the lyrics to “Santa Claus is coming to town” took on a much darker, sinister meaning.  I saw them turn Santa into some unrelenting, angry god. He was somebody that parents were always saying “Now, Santa won’t come if you don’t…”
1. Clean your room

3. Play nice with your brother

6. Anything else that happens to (randomly) pop up at any moment

In the end, a kid is sitting there going “How in the world can I please this guy? He expects me to be perfect all the time. Oh well, I’ll lay low until I get my GI Joe with the Kung Fu grip and then I can go back to my old ways.”

In other words, parents who seem to have a hard time controlling their kids the other 11 months out of the year, go nuts after Thanksgiving and sort of turn Santa into a cop or a task master… you know, a jerk. For these kids, there isn’t the fun and anticipation. There is no excitement. Just a big, fat Jerk who’s making their lives hell.

Answer: A jerk-free Santa who requires no worship.

You might be asking “How did I finally deal with Santa?” Well, I decided to think if there was any other fictional characters that my kids loved. The answer was YES! My son (only one at the time) lo 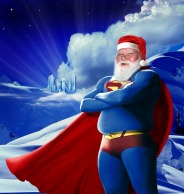 ved Superman. He loved how he was tough, loved kids and stood up for the little guy.  He thought he was the greatest. You know what else, he also knew that he wasn’t real. He was somebody invented to spark the imagination of readers. So when the day came when my son asked me if Santa was real or not, I said  “Is Superman real?” He said “LOL! NO! He’s just made up for fun!” I responded, “Yes and yet we both still love him, right?” My son “Yes we do!” I said” The same is true for Santa. He’s meant to be fun and exciting, but even though he’s made up like Superman, we still think he’s pretty cool, right?” My son agreed.

As my second son came of age, he really liked Batman, and we had much of the same conversation. The truth is, this grew into quite a fun game. On Christmas, not only will my sons

have gifts from Santa, the occasional gift shows up from Superman and even Batman. We even enjoy using our Batman voices when saying “I’m Santa”.

We even have Christmas ornaments featuring Santa, Batman and Superman. Each of them hanging from the tree checking for naughty and nice kids, and even the occasional super villain.

In the end, what we have chosen to do is have all the fun, without ever having to maintain Santa’s god-like image or being tempted to use him as some sort of bizarre control tool. No, my kids love Santa, but in a healthy way. As they have grown older, we have even talked about the real St. Nicholas (future post) and they think he’s pretty cool, too. As for the North Pole Santa, they will never confuse him for god or the devil. In fact, they also have something I didn’t have as a kid, they have a deep and profound love for Jesus. They know He’s real and that He indeed loves and cares for them as well.

So there you have it

Over the years I have taken some heat from the Santa “purists” and I have received some kudos for original thinking. But I know I did what I did because I love my kids and my Savior, and thanks to my parents, I love Santa Claus and to do this requires a healthy balance.